Did you go looking for Boxing Day bargains? 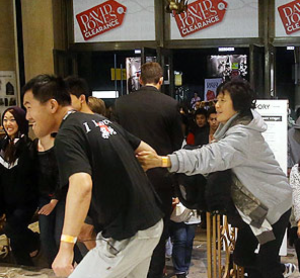 Feeling a compulsion to spend money even though there is nothing you really need?

Don’t worry, it’s just biology. The Australian Retailers Association predicts $14.8 billion will be spent in the coming weeks, helped along by human nature and the fear that if you’re not in the shops, you’re missing out

“As human beings, you assume that if lots of people want something, then we need to be part of it – it is the scarcity effect at work,” Dr Paul Harrison, a senior lecturer in consumer behaviour and advertising at the Deakin Graduate School of Business, said.

“If lots of people want it, it has more value. If we are looking around and everyone is grabbing for towels, even if we don’t need them, we feel that if we miss out which the whole scarcity thing is; we’ll miss out on something important.

That psychological response, Dr Harrison said, was helped along by marketing messages.

“In a positive light, I would say that people tend to respond well to marketing messages, but in a negative light, you could probably argue that people have a tendency to look at what other people are doing and what messages are being broadcast to help us to make decisions; so if we are constantly being told that these sales are amazing and lots of people are going to go there, then there’s a degree of behaviour which suggests ‘maybe if I don’t go, I’ll miss out’.

“One of the really interesting things is the way retailers are saying it is not going to be a great year, it is only a growth of three to four percent, but in reality, that kind of growth is pretty good, we just got used to unreasonable amounts of growth from the early ’90s until recently, particularly for retailers.

“So we have been trained to consume [a lot], and the post-Christmas sales are just another opportunity to consume. It has a little more hype, we tend to give it a lot more emphasis, but in reality, and everyone knows this, there aren’t that many bargains to be had and there are sales all year long now.

“It is not just the mid-year sales and the Christmas sales, so if you are thinking about it, we have been trained to respond to some degree all through the year, we just respond even more at Christmas.”

But if you do find yourself reaching for enough beach towels to keep the Australian swim team dry or returning home with more fitted sheets than you have beds, Dr Harrison said the smart way to prepare for the post-Christmas sales is just to take a breath.

“A lot of people quite like the frantic social nature of it and if that is really what you want to do, then that is fine for you and people like you.