How sincere is Dove?

The Dove Campaign for Real Beauty has been one of marketing’s great success stories. However, with the recent release of “Onslaught” on Unilever’s “Dove Campaign for Real Beauty” website, serious concerns have been expressed about the sincerity of the Dove campaign, and, in particular, the brand’s connection to other brands under the Unilever umbrella, particularly the Lynx brand.

The issue is not whether the Dove campaign is a good or bad marketing campaign, or whether it is good for promoting the actual cause around real beauty. What has created concern amongst consumer advocates, and some marketers, is the question of how Unilever can really be sincere about promoting self-esteem amongst women and girls through their Campaign for Real Beauty, when they also produce campaigns such as those for Lynx of the “Bom Chicka Wah Wah” advertisement, as well as other advertisements, such as the one for their Lynx “Touch“.

The Lynx “Touch” advertisement is replete with, barely hidden, sexual innuendo – a man fiddles with a radio dial (while nearby, the nipples of a woman can be seen hardening through her blouse), and, later he opens a book (resulting in a woman’s blouse opening, and an ample cleavage being displayed).

The Dove “Onslaught” advertisement is a mini-documentary, about one and half minutes long, but in that time the message being conveyed is clear – Dove wants us to believe that they are different from the rest of the industry. At the end of “Onslaught”, after we are bombarded with thirty seconds of imagery from “typical” beauty product campaigns, appear the words, “Talk to your daughter before the beauty industry does.”

Simply put, it is pure and blatant hypocrisy for Unilever to objectify women in its Lynx campaign, and then claim that we should protect our children from being objectified by the beauty industry, in its Dove campaign.

As consumers, we should be asking Unilever to explain how it can reconcile these two contrary perspectives, beyond Unilever’s spokeswoman Anita Larson’s justification that “Unilever is a large global company with many brands in our portfolio. Each brand effort is tailored to reflect the unique interests and needs of its audience.”

There are two ways to consider an issue such as this – from a marketing/branding perspective, as Larson is asking us to do, and, from an ethical perspective. In the context of the values being projected in the Dove campaign of respect for women and the importance of self-esteem, however, these two issues cannot be considered as mutually exclusive, and therefore must be considered in light of one another.

There is no doubt that the Campaign for Real Beauty has been a very successful branding exercise for Dove (and for Unilever). Clearly, women, girls, and some men, are uncomfortable with the objectification of women in much of the advertising campaigns presented to consumers. The identity of the Dove brand is now accepted as a brand that supports empowerment for women and girls, particularly in relation to self-esteem amongst women who don’t conform to the typical imagery in advertising and other media. And, in and of itself, the campaign is not a bad thing. The Campaign for Real Beauty website, and the sentiment behind the material on the site is good for changing attitudes about body image, beauty, and age. 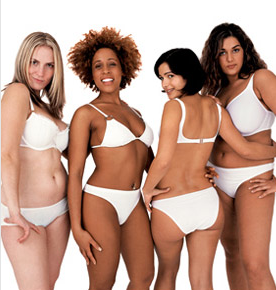 The campaign has also been effective in reaching a mainstream audience – often a difficult thing when dealing with something that might be considered a political issue. As can be seen by the many comments on the YouTube posting of the “True Colours” advertisement, such as gymnasticsbeauty, “omg i got goose bumps!!! oh my goodness greatest commercial EVER”, and randomkitty273, ” The ad isn’t discriminating against males it’s just saying the females are the main group affected by self-esteem issues”, the campaign is reaching its target audience. And generally speaking, it also seems to be having an effect on consumer behaviour – according to Olgivys, the company responsible for the campaign, the sale of Dove products has increased by more than 30 per cent since the campaign was launched in late 2004.

If we approach this purely from a marketing (or perhaps, corporate) perspective, then, it can be argued that the campaign has been effective in convincing the target audience of its sincerity. Our desire to belong is a critical part of what makes us human, and the Dove campaign attempts to create a bond around a desire for all women to be respected and valued for who they are, rather than some fantasy created by photographers, make-up artists, and computer generated images. The bond is strong, because the sense amongst the target market is a belief (whether true or not) that advertising is male dominated, and advertising and imagery used is usually targeted toward a male sensibility.

Whether Unilever, as opposed to Dove, is sincere, however, will most likely not be part of the target market’s thinking, because the connection between Unilever and Dove is not part of their marketing. This is why Unilever doesn’t spend a lot of time promoting its corporate brand to the general market. Indeed, it is very much a strategic decision to not promote the connection between all of the brands under the Unilever umbrella, from Impulse, to Pears, to Streets, and Lipton’s. These brands have different target markets, and this diversification, or segmentation, is the bedrock of marketing, and anyway, to most of us, a brand’s connection to its parent company is really not that important.

Anthropologist, Grant McCracken, in his blog goes one step further, and suggests that it is not really up to us to decide “what Unilever can and can’t say when it makes an ad for Axe (Lynx in Australia)”, or for any other brand manufactured by them. This is a reasonable position to take if we think that the market (and advertising) sits separately from the rest of society. However, it is unrealistic to think that this is the case – the market is inextricably linked to the society in which it exists. Consumption (and the market) does not exist within a social and cultural vacuum.

I actually think that it is for us, as consumers, and as members of the community, to question “what Unilever can and can’t say when it makes an ad for Lynx”, or for Dove. We can say this by our shopping behaviour, and we can also say it by pointing out the hypocrisy of the claim, when provided with the evidence above. Unilever cannot use the “market” as an excuse to separate two brands under its control, regardless of flimsy claims that Unilever is the corporate brand, while Lynx and Dove are product brands. There is incredible inconsistency in a corporation that happily promotes the sexualisation and objectification of women through one brand, while arguing that it is the champion of women’s rights through another. Consumers should be calling for more ethical behaviour from Unilever, as well as from the beauty industry.

8 Responses to How sincere is Dove?